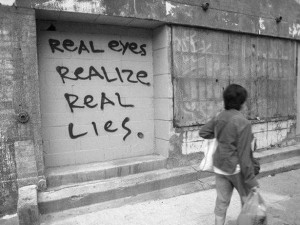 What is being Awake and how do we know if we are awake or not? Ask anyone if they are awake and they will say: Of course I am awake. But are they really? To what level? Are they even aware there are levels to being awake?

They know what is going on in the world because they learned it by watching television, listening to the radio, or reading the paper. They have bought into the illusion of the supposed world. They complain about the government, their job, and bureaucracy, etcetera – and feel nothing can be done about it because “that’s the way things are.” The do not realize they have been programmed to think and behave in certain ways. They have not yet broke through their programming. They go about their day staying within the status quo. “Sameness is good, sameness is safe. Conformity is the mandate. Do as you are told. Trust those in authority. Obey and do not question.” Conformity at this level is chosen over critical thinking or creativity.

People feel better about themselves when they are aware of others that think and act the same way they do. I’m OK, your OK. They are like me, so that means I am doing “it” right. I’m in with the in crowd. People that stand out are in danger. Danger of being ridiculed, of being targeted, of being different. Keep in line or you will be ousted. Do things the same way because that’s the way it has always been done.

Reactions are automatic – you don’t have to think about them. These are my beliefs,so when A happens I react with B and I don’t have to think about it because I already believe – – -. This is where prejudice comes from. People hold certain beliefs about others and when they come in contact with them through a situation they rely on the belief structures rather than a critical view of the present situation. It is a lazy way of dealing with something.

Everyone is aware that the planet Earth’s environment is in jeopardy. But most people think they have no power to change that fact. Becoming aware of the environment is our first and primary level of awareness.

When babies are still in the womb, there has already begun the first levels of consciousness. There is little separation from them and their environment. This is in fact the state we need to get back to. “Mother, please let me back inside.” Lyrics from Pink Floyd. Not that we need to return to the womb. We need to become aware that the world we live in is not separate from us.

One of the first levels of breaking thru is realizing what they are being told through the media is not to be entirely trusted. Some things just do not ring true.

More and more they see that they are being manipulated to believe in certain ways. This is becoming more and more evident in recent times. As people evaluate what the have been told and start to cross reference with other sources, they eventually come to the realization that their own thinking has been biased in certain directions. The media has been doing it so long, they have become expert at it. There is a science to it and they know it well and use it.

Thusly, one of the first levels of becoming aware is realizing we have been lied to by main stream media. We are targets of propaganda. At the simplest level of propaganda is exaggeration. Products advertised on TV are obviously portrayed in their best light, but often that light has been messed with. Pay careful attention to the wording in commercials, because there in lies the deceit.

"I am not allowing my Perspective to be dictated by the dominant culture." - Holly Near

What is an ADHD mind. The first thought of many would ...